Each term, the children will experience a 'Curriculum day'. This will help to enthuse the children in their topic learning whilst applying skills which they have previously learnt. Have a look at some of the curriculum days which we have experienced so far:

In October, Ask and Willow came to school dressed as Ancient Greeks:

First, to show their importance, the children made some laurel wreaths:

Next they used natural materials to make Ancient Greek temples...

and then created dough sacrifices for the Gods...

They ended the day by holding their own Ancient Greek Olympics!

Friday 1st December saw Years 5 and 6 grab their suitcases and gas masks and head off into the world of the evacuee. Despite the arctic conditions in the morning, the children had great fun whilst building their very own Anderson shelters in the woods, practising both their foraging and team work skills.

The afternoon saw the children write home on a postcard to their 'families', telling them about their train ride and new homes, and then the children got to finish the day by building paper spitfires, the heroic fighter plane of the British army in WW2.

Here are a collection of snaps showing everything the children got up to: 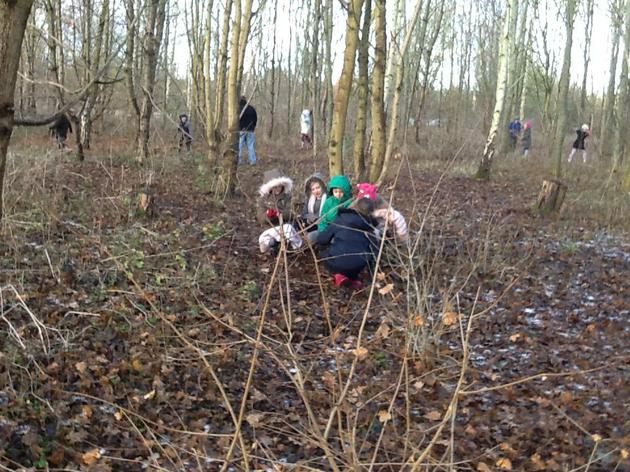 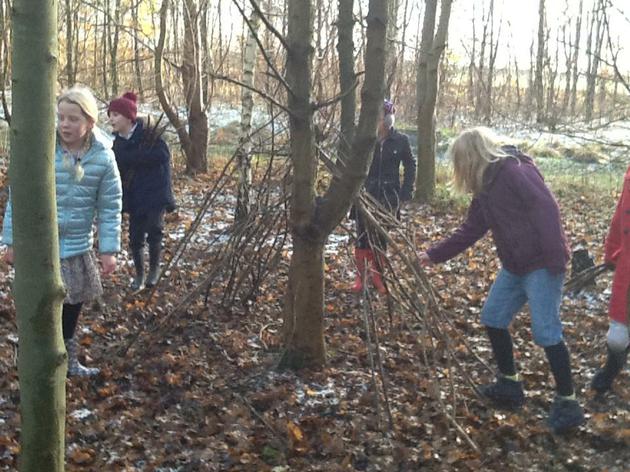 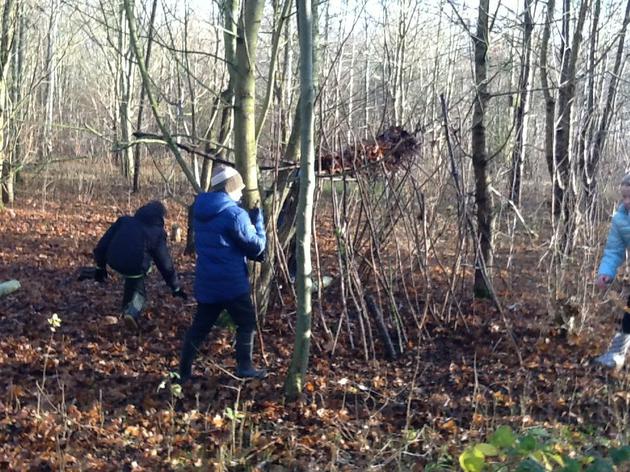 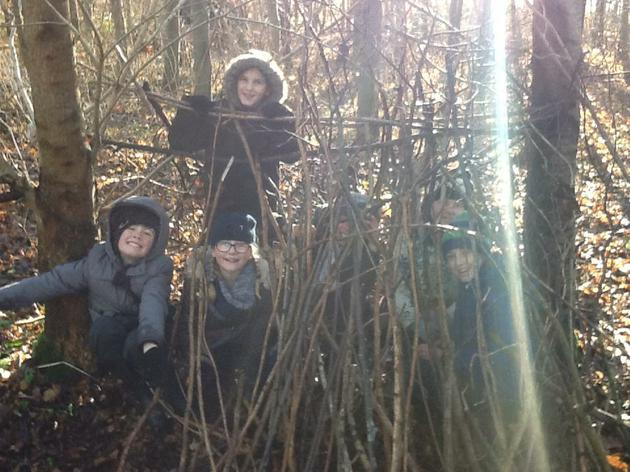 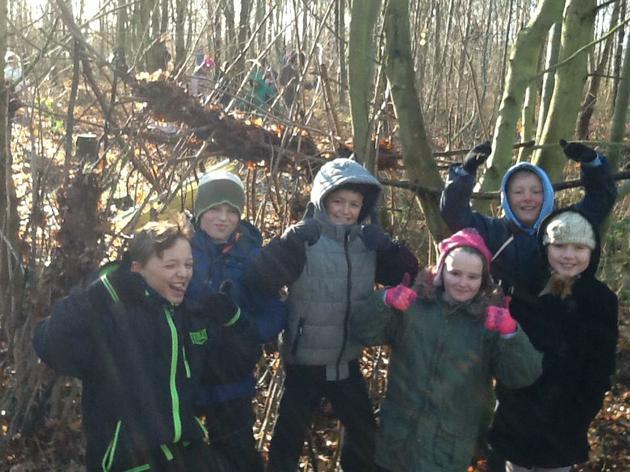 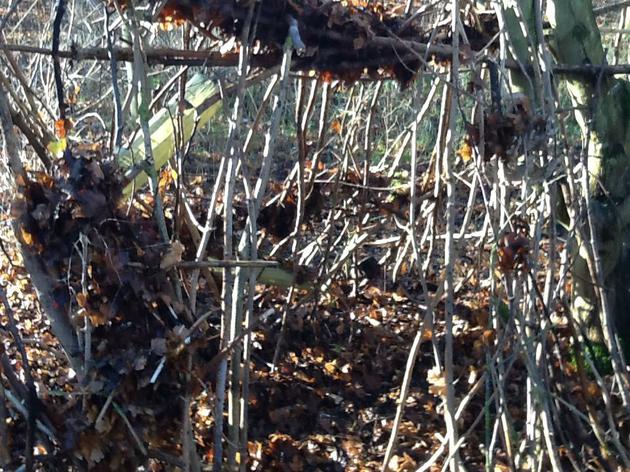 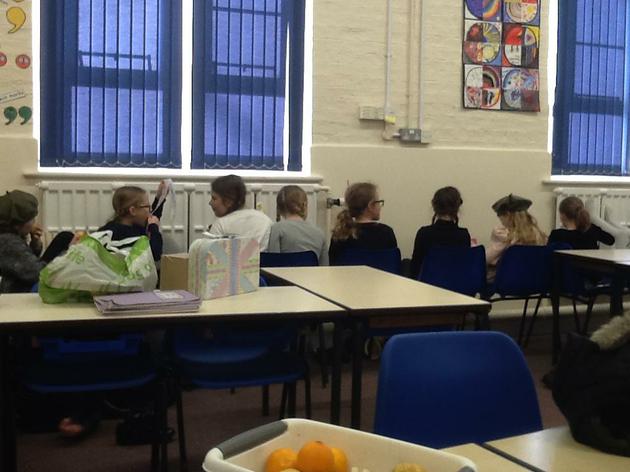 The children took to the radiators to try and warm their feet up! 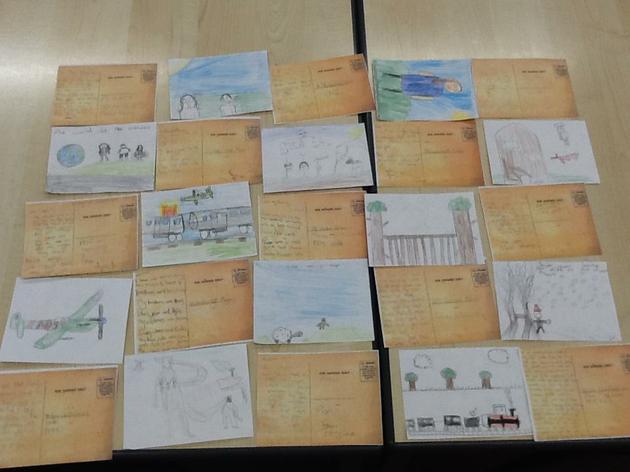 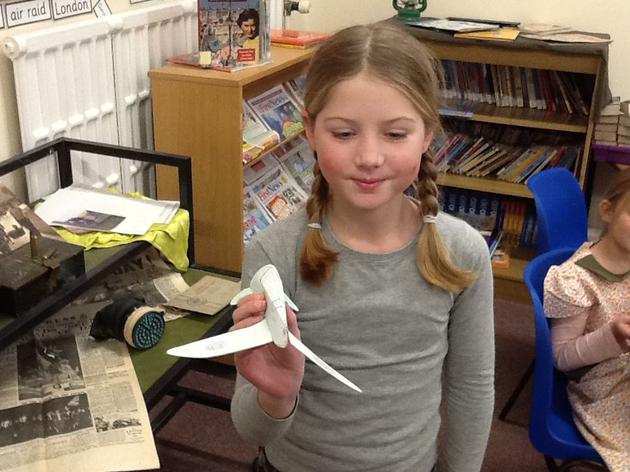 On Monday 20th November, the children in Year 3 and 4 arrived at school dressed like stone age boys and girls.

They chose their own stone age names and used their imaginations to create their own character profiles. They were told that they had moved to Manea because they had followed footprints of bison and woolly mammoths- and being hunter gatherers they moved to where the food was. They considered why Manea would be a good place to build a settlement. The children suggested things like lots of flat land, water and shelter in the woods. So off they set, to build their own shelters in the woods (they had to pretend the materials used were actually animal skins!).

Whilst they were there, they also spoke about Stone Age weapons and thought about how they would hunt these animals. They found out that people on the Stone Age would use sharpened flint to make tools- they used the knives to create the same effect when making their very own spears.

Back at school... they went hunting!

In the afternoon, there were two activities for the children to complete. The first required children to write a diary entry using simple pictures and symbols with charcoal- but they had to lay under the tables to do this!
The second, was to make Stone Age jewellery. They hollowed out willow to create beads and threaded shells onto string. They also used the shells to do some Maths.

This week, Willow completed their Curriculum Day on their Roman Topic.

After watching the wonderful reconstruction of the events of Pompeii,the children enjoyed a variety of activities, including writing a diary about a Roman citizen, who lived in Pompeii, and writing a poem on the life of a Roman soldier/gladiator. Willow class were also able to create a cartoon strip based on the events of Pompeii. Children explored some historical artefacts, including Roman clothing and Roman implements. I think Willow Class  now appreciate how the area, in which they live, is steeped in so much Roman history!

Willow Class participated in their own version of 'Who Wants to Be a Millionaire' called ' Who Wants to Be a Roman Citizen'. They were asked a number of questions on their Roman topic and were given four answers to choose from. Unfortunately, they were unable to "Phone a friend", however, they could use the Ipads/laptops to research the answers...

On the 28th March, six glittery bags were delivered to Ash class. First, they had to read a number of different texts, including boarding passes, receipts and diary entries, to help them figure out who sent the mysterious packages. They soon realised they were sent by a relative of the Roman inventor Maddasbananus (from the book Roman's on the Rampage).

They then read a letter from Salvatore Maddasbananus. It explained that he has been having trouble getting any of his inventions to sell and asked the children to create their own inventions. They had to use only the equipment he provided within the bags.

On the 23rd March, Fir class planned, filmed and edited their movies to enter the Cambridgeshire's Young People's Film Festival!

Pine Class had a wonderful 'icy' experience.  We found ice in our outdoor area and wondered how we could keep ourselves safe. We discussed what made ice, what could melt ice, and how we could make ice.  We then created lots of different sized ice cubes in our freezer.  We investigated it melting and then looked at how we could speed up the melting.  We knew that we added salt to the ice in our outdoor area to help melt it so we created salt water.  We then froze lots of different objects in ice and used pipettes to direct the salt water onto the ice.  We were so very happy when we were able to free up the objects.  This also helped our resilience as it took a long time!

This year for Red Nose day the children and staff came to school dressed in the colour red, or dressed as their favourite nose. Throughout the day the children learnt about where the money raised will go and completed many activities linked to Comic Relief. We also had a wonderful cake stall at the end of the day to raise money.

The children in Beech class found some old boots and a letter from Sir Edmund Hillary in the bird hide. It looked as though he stayed all weekend in their outdoor learning environment!

They used the letter to learn how to write a letter and to use ICT to find out more information about the climb.

On Children in Need day, the children were greeted with quite a mess when they arrived at school. Something odd had happened in every classroom and the children had to turn into detectives for the day. They followed clues around the school and eventually found out who the culprit was- Pudsey!

In November, the children in Ash and Willow class came to school in beautiful togas. Throughout the morning they learnt about theatre in the Ancient Greek times and made their own Greek masks and wrote scripts for Greek plays. In Maths, we learnt how to read and write Ancient Greek numerals- we found it tricky but we kept on trying. In the afternoon, we all came together to have our own Olympics- it was lots of fun!

On Friday 26th February 2016 the children of Manea Community Primary School got to experience a day in the life of a Victorian school child. The children and the adults all dressed up for the occasion. Have a look at some of the clothes that Victorian people wore below. 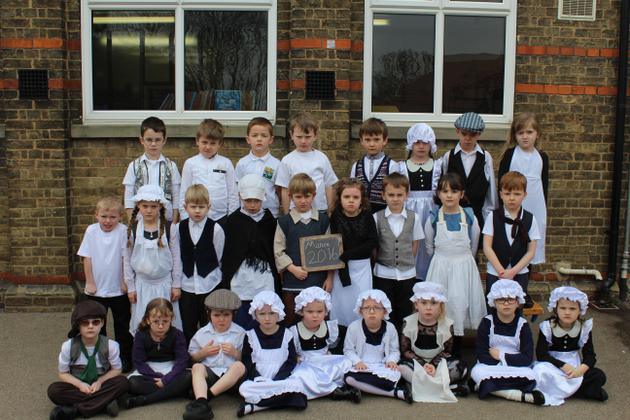 The day started with the children discovering that their classrooms had changed. The tables were set out very differently and even some of the nice things that we like about our environments were hidden. The teachers also stopped using their interactive whiteboards and swapped them for chalk boards.

After morning registration we went to assembly as normal and celebrated everyone's achievements. Shortly after the assembly we returned to the school hall to experience a typical Victorian assembly.  Miss Froggatt was our head teacher and she was very different! She wore a black hat and a long black cape. When she came into the hall we all had to stand up in silence until she told us otherwise. During the assembly Miss Froggatt explained the rules and what might happen if we broke them. Some of the children said she was very strict.

One of the final things we got to discover was what a Victorian school lunch may have been like. We got to the hall and found that we needed to be sat in two long rows. Before we were allowed to eat anything we had to wait until Miss Froggatt said grace. We had nothing but dry bread and an apple to eat. Some of the children said they preferred this to our normal school dinner! During the time where we ate our food we had to sit in silence. Mrs Stevens got told off by Miss Froggatt for talking and ended up standing outside her office for a while!

During the school day we were able to experience some Victorian games. We had hula hoops, marbles, jacks and skipping ropes and we found this kind of break time extremely fun!

During the day all three classes looked at some Victorian artefacts from the March Museum as well as some that were given to use. We also looked at very special photos.

After looking at these images we decided to take our very own Victorian school photograph. Can you spot the differences?
Top
Cookie information
Cookie Notice